as long as it is red

with meals or alone

wine is the secret dream of the grape

none want to wither on the vine or jelly.

The grape wants to be loved

Desire to be held on the palate for a while

and flutter of the eyes 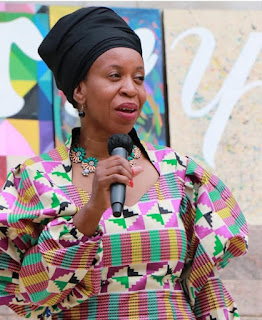 In addition to being Poet Laureate of Paterson, New Jersey, since 2018, Talena Lachelle Queen is founder and executive director of the Paterson Poetry Festival, now in its fifth year. She is also founder and president of Word Seed, Inc. a team of literary artists who organize community outreach programs. Her publications include a forthcoming poetry collection How Do I Tell Them? (Poets Wear Prada), Soup Can Magazine, POETS UNiTE! The LiTFUSE @10 Anthology (Cave Moon Press), and When Women Speak (ed. Ameerah Shabazz-Bilal). A sought after artist, Queen has performed at many places including the NJ Governor’s Mansion, Hoboken Historical Museum, and with NYC Men Teach Hip Hop Cypher.
at November 23, 2022 No comments: 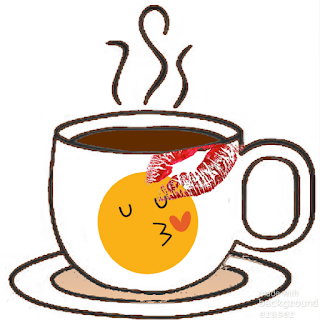 I’ve not been a coffee drinker, until recently,

when I  started wearing makeup again, after your last yahrzeit — and red.

Passion was one of your favorite colors, but you hated the stain it left on your face.

meat, every meal. I wear leather, velvet & lace — chains by the bed.

I speak out. I shout. Your girl has grown up. I remember you with fresh red

roses every Wednesday — Daddy would surprise you, after work.

When will I feel okay again? Will I find the answers to life, traveling? I miss the red

clay of Oklahoma, where you once told me you would never leave. Momma, what a liar you are! 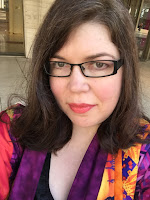 Carrie Magness Radna is an audiovisual cataloger at New York Public Library, a choral singer and a poet who loves traveling. Her poems have previously appeared in The Oracular Tree, Mediterranean Poetry, Muddy River Poetry Review, Poetry Super Highway, Walt’s Corner, Polarity eMagazine, The Poetic Bond and First Literary Review-East. Her latest poetry collection, In the blue hour (Nirala Publications), was released in February 2021. Hurricanes never apologize (Luchador Press) was published in December 2019. Her fifth volume of poetry, Shooting myself in the dark (Cajun Mutt Press), will be published in early 2023. Born in Norman, Oklahoma, Carrie lives with her husband in Manhattan.
at November 23, 2022 No comments:

Jack’s in Wisconsin with a girlfriend

whose father is down one cow,

which I become in its death,

“out in the woods with its legs sticking /

straight up to the stars.”

Its unborn calf is by its side.

And so I become animal mother

sorrow, my eyes aching and red,

My legs pointing to the endless.

I am galled by the up and

down of love, a boulder

Quote from “Thinning the Herd,” I Have No Clue by Jack Wiler (Longshot Press, 1996)


Sarah Sarai has published two to three poetry collections, depending on how you reckon, and a bunch of short stories. A native New Yorker, she lives in the big city, where she is an independent editor of poetry, fiction, and nonfiction.
at September 14, 2022 No comments:

Your kisses taste of raspberry

slide down my throat

melt each nerve as they pass into me

hidden beneath lashes against flushed cheeks

pulse skips as your lips travel along my neck

that make the sun jealous

threads of our clothes — prison bars! —

too inebriated to have names

buttons undone by a nimble touch

hints of the enduring myth of heaven

paradise in your arms

give me rapture with each kiss

spread out on heated current

friction of flesh against flesh

our mouths explore one another 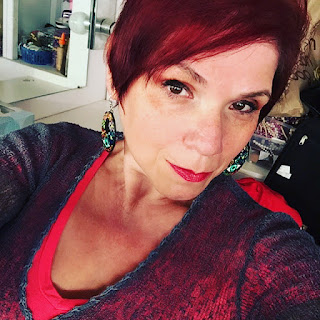 Susan Justiniano aka RescuePoetix is the first Puerto Rican and the first woman to serve as Poet Laureate of Jersey City, New Jersey. She is a self-taught, bilingual poet with a deep love for knowledge, music, coffee, food, dogs, and the color red (not always in that order). Words are embedded in her life. Her passion for them started at age nine with a dictionary, notebook, and the latest paperback she could get her hands on. Like a bad penny, you can find her everywhere: https://linktr.ee/rescuepoetix.
at June 01, 2022 No comments:

picks the motors of pentaculated

runners on a field of display

a hoax or an alarm.

It used to be the columbine

in a summer’s hottest tranche.

must catch a feathered red

to charge against the wickets

of a ghostly bricolage

a breach to ease the canted branch.

If weakly cardinal in cold

Where seeking bred of seeing’s heart-

flash if a stranger to an anger

braised the coals the scarlet

sparks not in the day played in the dark.

A tang to spin the spangled manger

underlay the helicopter hats amid

the gladiolas and poinsettia.

They drew the straws but kept

away the cats. A sanguine sprat

could stir the faintest blush

so let us taste the lips’ best rush

of comfort in the common claret

all ablaze and brandishing the fadeaway. 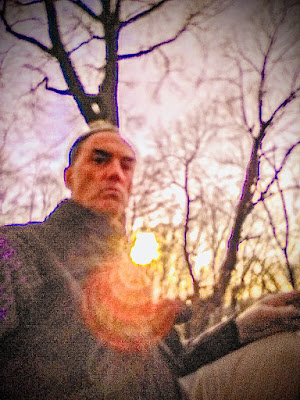 Robert Mueller is the author of Hereafter Knowing in Sonnets and Their Similars, an adventurous undertaking in literary history and critical interpretation under the signs of philosophy and theology. Other recent writings to his credit include a poem in And Then, poetry of an unusual stripe in Home Planet News Online and, in Spinozablue, a group of poems focused on the topic of our precious wetlands as well as an essay titled “Petrarcan Naissance.” Robert has earned multiple academic degrees, a PhD in comparative literature from Brown University, an MA in classics from the City University of New York, and a BA from Yale University. Among his major publications are essays and reviews found in Jacket2, American Letters & Commentary and ELH.
at March 07, 2022 No comments:

In New Jersey, after the evening rain, the daffodil green tips are popping up among the remaining brown leaves of fall. The cherry trees will be next, their blossoms filling the air with pink snow. Tulips should avoid the unpredictable weather of March and make their entrance in April. Spring is beautiful, I await it impatiently.

Once, I was a painter, a colorist. Today, I am a photographer, a digital artist, who approaches the photo image from a painter's perspective and with a painter's vocabulary. Color is still foremost in my consideration of the elements of a piece. Nature is my muse. I transform my original photo, pushing saturation, hue, value and contrast, to abstract it from a photographic reality to a painterly space. 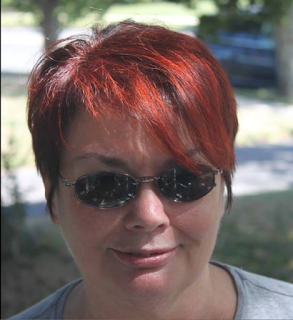 Belle Koblentz is a New Jersey artist living in Colts Neck and a member of the Art Alliance of Monmouth County. She received her BA in Visual Arts and an MA in Aesthetics from the University of Texas at Dallas.
at March 01, 2022 No comments:

Bruce Whitacre | What Is Fire to Me, or, Sailor’s Delight

What Is Fire to Me, or, Sailor’s Delight

that just flew down a burning West Coast;

Facing west, we eat at a High Plains café;

Bryant Park is sticky with a strange haze;

our tongues salted with the cremated West:

Coast to coast, the signs rain down from heaven, 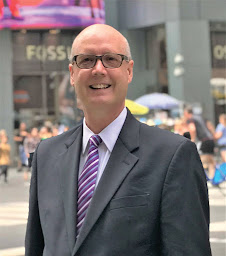 Bruce E. Whitacre’s recent publications include Hey, I’m Alive; Nine Cloud; Pensive; Diane Lockward’s third volume on craft, The Strategic Poet; and the 2022 anthology I Want to Be Loved by You: Poems on Marilyn Monroe. Work here was nominated for Sundress Publications’ 2020 Best of the Net Anthology. A featured poetry reader at the Forest Hills Public Library, he has read his work at Poets House, the Zen Mountain Monastery Buddhist Poetry Festival, Kew Willow Books, Lunar Walk, and other venues. He holds an MFA in Dramatic Writing from NYU’s Tisch School of the Arts and has completed master workshops with Jericho Brown, Alex Dimitrov, Rowan Ricardo Phillips, and Mark Wunderlich. Bruce is a native of Nebraska and lives in Forest Hills, Queens, with his husband.
at February 24, 2022 No comments: 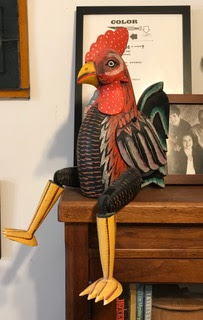 The photo of me in a velvet dress I wore ice skating with my mother at Rockefeller Center when I was small.

The neighbor’s hair (more towards the orange) of which I was jealous.

My favorite pair of readers.

One of two loomed Lithuanian bookmarks that grace my writing desk.

The two-toned spine of Yi-Fu Tuan’s Passing Strange and Wonderful.

The 26 (times two) luminous leaded squares of the Dutch stained-glass doors that lead to our garden.

The timid male cardinal (due to his stand-out hue?) and his less timid, subtly colored spouse.

Brilliantly backlit, at times, the dot of color that informs us the male downy woodpecker is at the suet.

Rooftop peppers that punctuate the winter palette, strewn throughout the garden by squirrels.

The ristra I strung from shishitos that changed color at summer’s end.

The speckled comb of my mother’s folk art rooster that’s come to our house to stay. 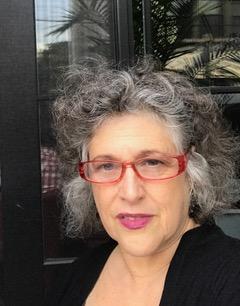 Lynne Shapiro has been a writer-in-residence in England, Morocco, and Spain. An arts educator for many years, she worked at the Whitney Museum of American Art and was once an assistant to Susan Sontag. Lynne’s first chapbook, To Set Right, was published by WordTech Editions (October, 2021). Her book, Gala, is forthcoming from Solitude Hill Press (March, 2022). She lives in Hoboken, New Jersey with her husband and elderly turtle. For more information and upcoming events, please visit her website; www.lynneshapiropoet.com
at February 22, 2022 2 comments: 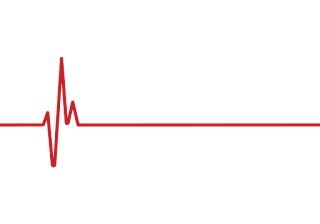 You searched for oceans

while we lived in the desert.

freeze-dried in my mouth.

The southern tip of the sun

I saw that abnormality,

on a red-eye flight, alone.

Should I leave an apology

What else did I do wrong?

Did we go too far?

All I have left

are a few good pics,

All I want is to fall

apart in your arms,

but you rode away

in your red Jaguar.

until it was too late.


E Penniman James lives and writes poetry in Brooklyn, New York. His poems have appeared in the anthologies Pluto 1 (Propoetsy, 2022), Birds Fall Silent in the Mechanical Sea (great weather for Media, 2019), and Lyrics of Mature Hearts (Gordon Bois Publications, 2020), as well as several online publications.
at February 10, 2022 No comments:

The redness spreads over the sky like a blush

calming the frantic nerves of morning into

Is it the sailor in my soul, delighting over

this change in light?

Is it love tinting my glasses, warping my vision?

Is it the throbbing pain, attesting I am alive?

Is it the globe with vermilion on its forehead?

Is it the bleeding firmament?

Or is it fear or courage, victory or war?

How we interpret this play of colours,

How we weave stories of Adonis and Aphrodite

How, then, the art on my wall never is red —

Perhaps, it was never a colour

meant for the shy,

though in their blush,

a hint of it they cannot deny. 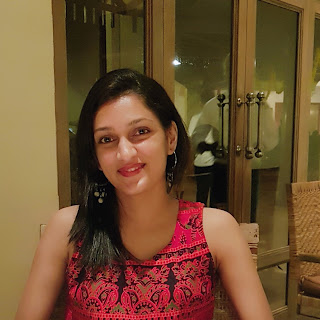 Akshaya Pawaskar is a doctor practicing in India, and poetry is her passion. Her poems have been published in Tipton Poetry Journal, Shards, The Blue Nib, North of Oxford, Indian Rumination, Rock and Sling, among many others. She won the Craven Arts Council ekphrastic poetry competition in 2020, placed third in the Poetry Matters Project contest that same year, and placed second in The Blue Nib chapbook contest in 2018. Her debut poetry chapbook, The Falling In and the Falling Out, was published by Alien Buddha in January of 2021. Follow her on Instagram; her IG handle is @akshaya_pawaskar.
at February 07, 2022 2 comments: